I’m pretty sure a real cowgirl wouldn’t be seen dead baking scones and you can read about some of them here, including a few feisty historical ones, in this wonderful piece by fellow blogger LL. Thanks to her illuminating article I can now make free with the verb ‘to cowgirl up’, doesn’t it just slip off the tongue? It basically means that you saddle up to any job with gusto and purpose. Which is how I intend to approach the baking of scones for a Cornish Cream Tea.

I have my mother to thank for any baking skills I’ve acquired, who passed on her extensive knowledge to me and my siblings from an early age, though I was probably thirty five before it dawned on me it wasn’t a matter of life and death that you got EVERY SINGLE BIT of cake mixture out of the bowl, a necessary frugality in time of war and rationing, likely passed by my grandmother to my mother who carried it on into the 1960’s and beyond.

A first attempt at Rock Cakes, I must have been four or five and my sister H seven, resulted in some foul tasting pale green lumps, a consequence of the blue shoe polish which we’d (or maybe it was me, can’t remember) been using only minutes before the mixing. Stirring the Christmas Pudding was always an important event, each ingredient, including a sixpence (I just about remember these) or a ten pence piece (ok money in those days!) adding to the unctuous whole. I never did actually like the pudding itself but I loved the ritual. Mincemeat on the other hand I still usually make (better get on with it…), you really can’t beat a homemade Mince Pie, can you?

Since then, bread has been added to the repertoire, but for some reason I haven’t baked many scones and when I have the results have been indifferent, let’s say flatter, than one would like. You can find a comprehensive overview on the baking of the perfect Scone here if you’re interested, a Guardian article by Felicity Cloake, it’s really good.

Anyway, my mum, stepfather and sister are coming for tea so I thought I’d give them a Cornish Cream Tea – scones, clotted cream and strawberry jam.

Baking is part of our family story as it is with many families. Participatory and comforting, it draws people together, plus you get to eat really yummy things as well. Some of my best memories of being at home are when my mum used to bake a cake on a Sunday afternoon in wintertime and we’d all gather from our fairly disparate lives and have tea in front of the fire. Favourites included Hot Lemon Teacake which involved copious amounts of butter melted between the still warm cakes, a really good idea because you don’t even have to let the sponge cool down, how great is that. Then there was Mozart Cake, I’ve no idea why it was called that, which was made with ground hazelnuts and spices and had a slab of thick dark chocolate on the top, this was my choice for a birthday cake for years. Then there was the regular Victoria Sandwich, still my all time top favourite cake, and a basic Chocolate Sponge with Coffee Icing – this one went down a few rungs on the ladder after an episode of over-indulgence.

For this tea I fell for the marketing of Womens Institute jam which is the mass produced version of a tried and tested recipe, which thousands of people have been cooking up in their kitchens for decades. I was hoping to use my neighbours’ jam which she sells outside her house but she had no strawberry and any purist will tell you that this is the one it’s got to be for a cream tea.

But let the scone show begin!

Whisk dry ingredients together, then rub in the butter and add the milk.

Knead dough quickly, roll out to 1 inch and cut rounds, I think speed is the key

Oh dear what would Mary and Paul from the Great British Bake Off say about the state of my workstation? 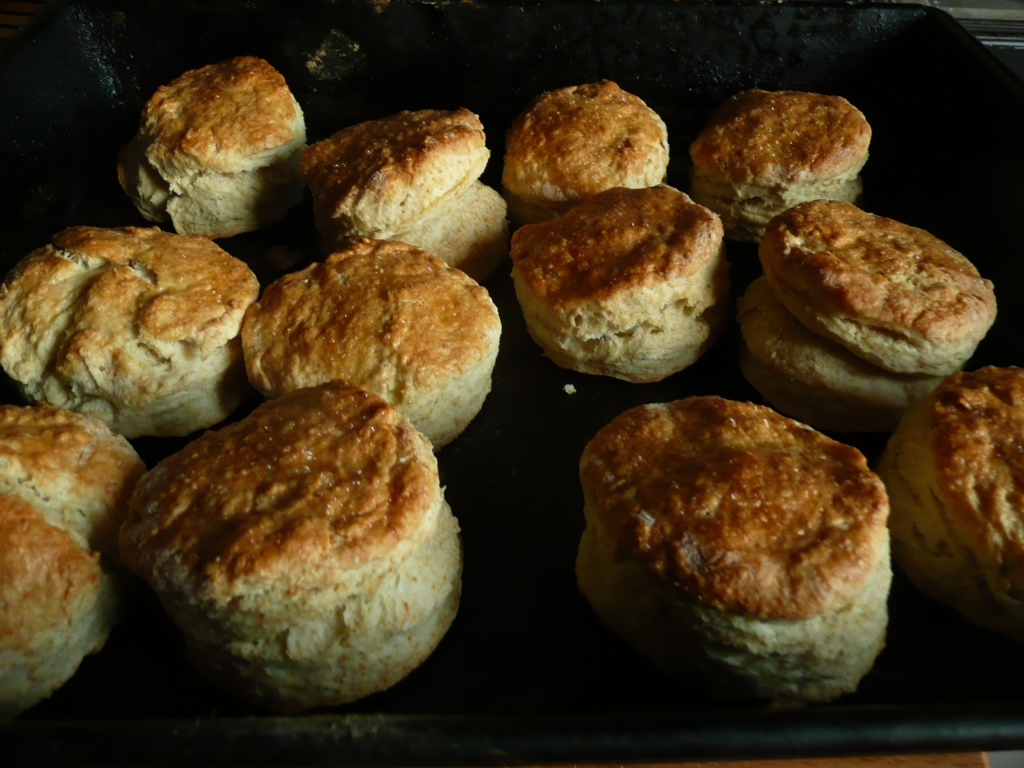 Brush the scones with egg and bake in a hot oven for roughly 10 minutes. Can’t believe it, I’ve had rising! Must try this cowgirling thing again. 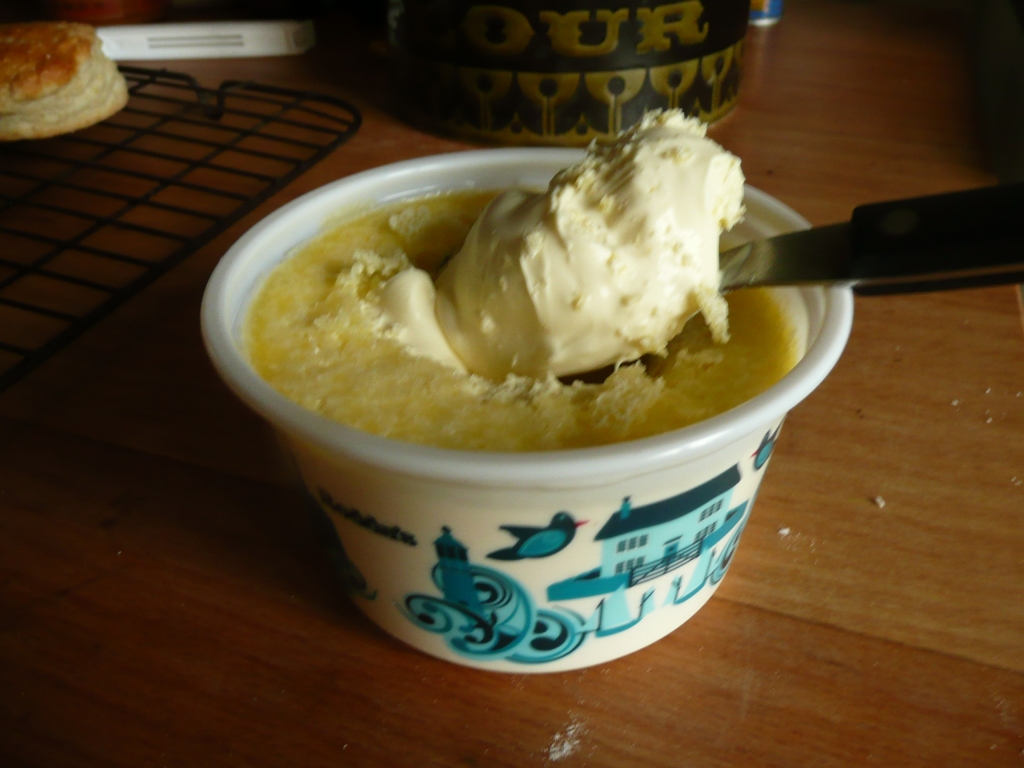 Get the clotted cream, I prefer it not straight from the fridge.

Make the tea, and assemble the scones, jam and cream 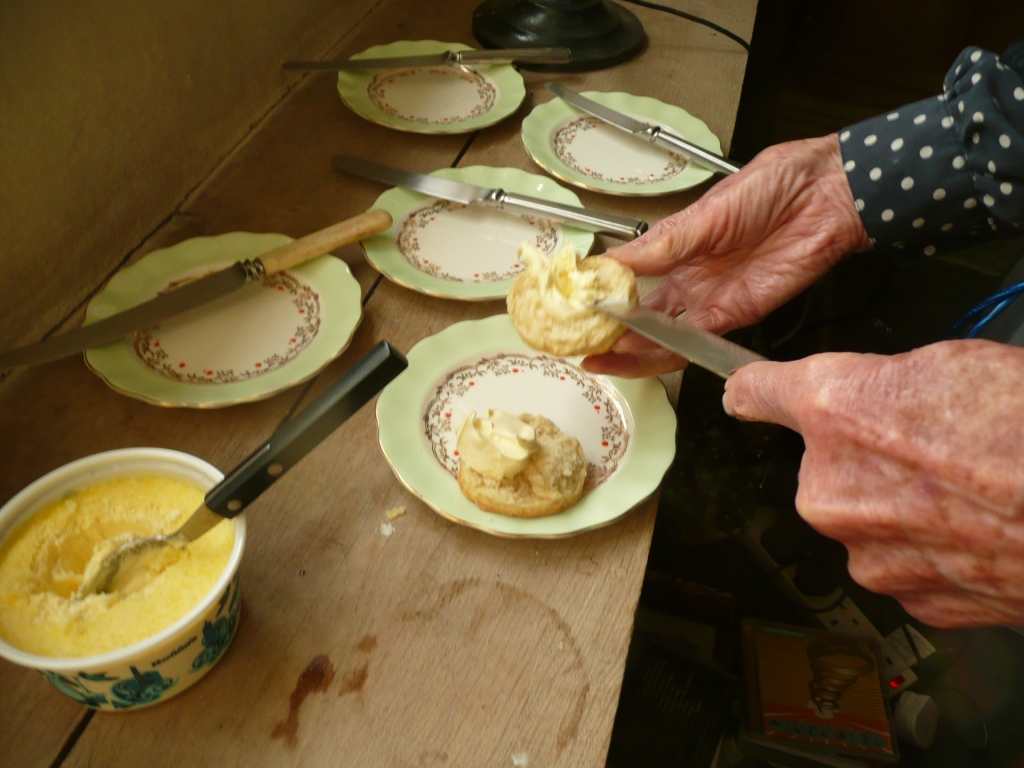 Get your guests to help themselves. There are differing opinions (the source of many a tea time squabble) about whether it’s jam or cream first, but as long as they’re both on there who cares 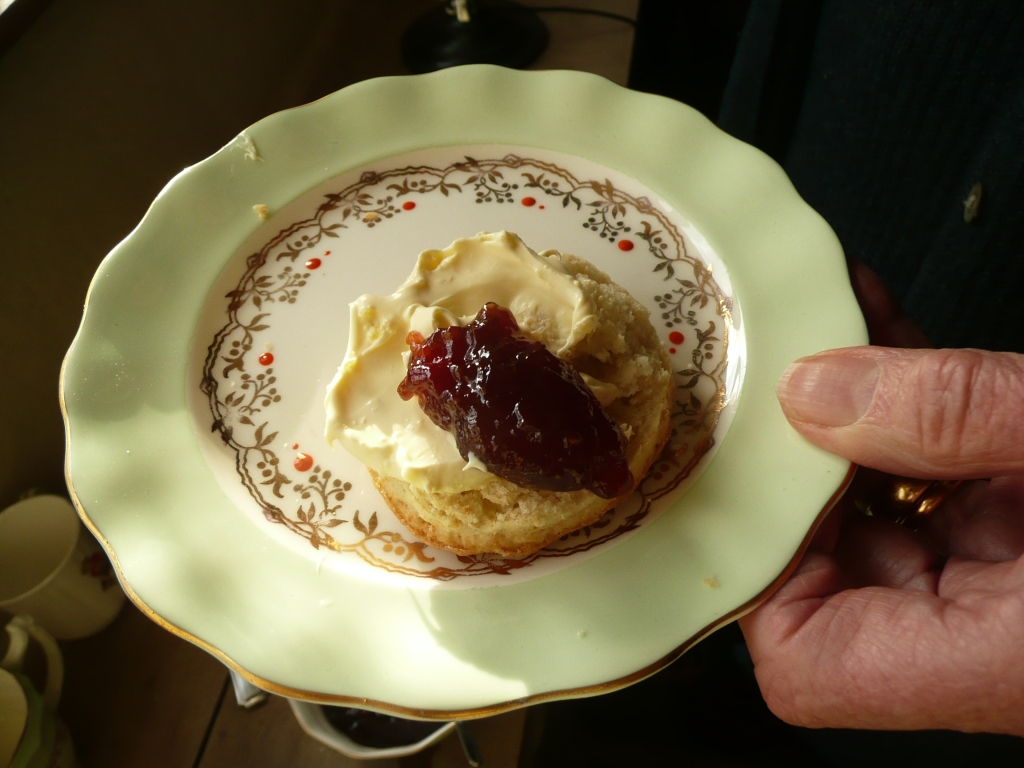 Go on, please tell us about your baking memories and favourite cakes!

PPS. Are you a Downton Abbey fan? Try this funny post from my friend T, plus there’s loads of nice pictures of old kitchens.